Kevin J. Anderson is the author of more than 115 books, 52 of which have appeared on national or international bestseller lists; he has over 23 million copies in print in thirty languages. He has won or been nominated for the Nebula Award, Bram Stoker Award, The Faust Award, the SFX Reader’s Choice Award, the Scribe Award, and New York Times Notable Book.

Kevin has coauthored twelve books in the Dune saga with Brian Herbert. Kevin’s epic SF series, The Saga of Seven Suns, is a 7-volume opus that topped international bestseller lists; he is currently at work on a sequel trilogy, The Saga of Shadows. His Terra Incognita trilogy is about sailing ships, sea monsters, and the Crusades, and he even produced and cowrote the lyrics (with his wife Rebecca Moesta) for two crossover rock CDs based on the novels, performed by rock legends from the groups Kansas, Dream Theater, Asia, Saga, and others. He wrote the novel based on the Rush CD, “Clockwork Angels,” with his long-time friend Neil Peart, the band’s drummer and lyricist. The first three books in Kevin’s humorous horror series featuring Dan Shamble, Zombie PI, will all be released within the next year: Death Warmed Over, Unnatural Acts, and Hair Raising.

He has written numerous Star Wars projects, including the Jedi Academy trilogy, Darksaber, the Young Jedi Knights series (with Moesta), and Tales of the Jedi comics from Dark Horse. He wrote three X-Files novels, including the #1 bestseller Ground Zero, and also collaborated with Dean Koontz on the novel Frankenstein: Prodigal Son, which sold a million copies in the first year of its release.

For HarperCollins and DC Comics, his novel Enemies & Allies is about the first meeting of Batman and Superman in the 1950s during the Cold War and The Last Days of Krypton chronicles the end of Superman’s planet. He hasscripted numerous bestselling comics and graphic novels, including Justice Society of America for DC, Star-Jammers for Marvel, Star Wars and Predator for Dark Horse, X-Files for Topps, and Star Trek for Wildstorm. He and his wife Rebecca Moesta also wrote the original comic series and graphic novel, Grumpy Old Monsters for IDW.

You can find him online at www.wordfire.com.

And check out all our panelists! 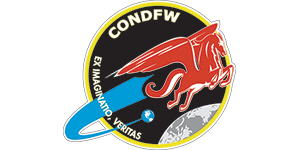 ConDFW is a science fiction and fantasy convention featuring writing/publishing based programming, science programming, an excellent collection of guests, art show, a charity book swap and auction, a short story contest, and a slew of non-traditional activities such as the Sci-Fi Spelling Bee. ConDFW is brought to you by the Texas Speculative Fiction Association, a 501 (c)(3) organization.

ConDFW is a 100% volunteer-run event.